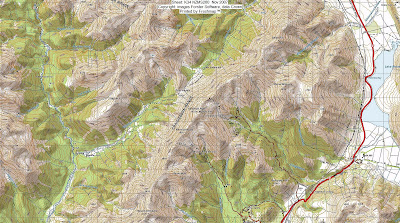 This was a trip I did with the Christchurch Tramping club and below is the trip report I wrote at the time which was posted on their web site.
It was a reasonably clear and dry Sunday morning as I met my fellow explorers at Springfield, lead by Captain Warwick, his advisor, First Officer Frank, and their crew of seven.
After the usual relief stop, pies and map consultation, we set off for Craigieburn Forest Parkland; our destination, Hamilton Peak.
We parked our horseless carriages at the Broken River ski field car park and climbed the access road through the luxurious resorts of the Broken River ski club. We then ploughed our way up the slopes of the ski field with first officer Frank doing a sterling job of making the rest of our lives easier in the snow. A stop at the top afforded awesome views of the snow capped Grey and Black Ranges. Jackets were donned to keep out the wind as we traveled along the ridge via Nervous Knob and onto Hamilton Peak.
After a very quick lunch, we descended down the spur towards Camp Saddle. Here we were introduced to the new Olympic sport of bum sliding, by Honora. And so several grown and mature adults(!!!) spent the good part of the next 45 minutes sliding down the slope in various contorted ways.
Captain Warwick trying the "Head first on stomach" method, Joanna trying the "Wanting to see where I've been" method and Frank and Honora going for the "Flat-out" method. I knew snow had a purpose. Much fun was had and it was with some reluctance that we left the snowy slopes and entered the bush track back to the car park.