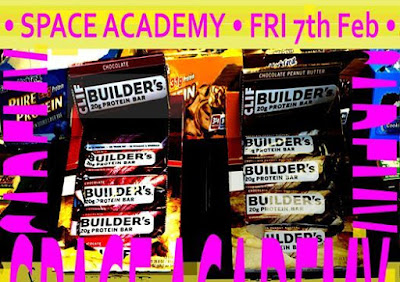 This was a gig that came a little out of the blue with a notice popping up on The Builders Facebook page earlier in the week and it seems very little else in advertising or promotion that I saw elsewhere. It was also a bit of a surprise as last time I saw Bill Direen and this particular version of His Builders, he announced at the end of the gig that it would be the last time we would be seeing The Builders play in New Zealand as he was retiring the band after a few gigs in Australia.
It looks like he enjoys it too much to really hang up the towel and I am most pleased to have got to see them play again. It was October 2018 the last time I saw this group over the road at The Darkroom.
Bill has convened many different versions of The Builders under several different variants of the name over the last 40 Years, but this is the same band he played with in the last gig mentioned above, Greg Bainbridge on bass, Stuart Page(of Axemen Fame) on drums and Bill on guitar, keyboard and vocals, the lineup that recorded The Conch 3 album in 1985.
I arrived early at Space Academy, just on door opening time and was about the third person through the door. The Band was sitting around in the front porch waiting for Bill to show and they actually started playing just prior to 9PM. Space Academy is a small venue but the audience this night was rather small with perhaps about a dozen people in attendance for the first 30 odd minutes of the set. A few more straggles in as the evening progressed  but the venue was not even quarter full by the time the band had a break around 10PM.
The lack of people didn't phase Bill at all, the band played on with Bill telling stories and introducing the songs that were drawn from all the periods of his long career, with songs going back to the late 70s when he was living in Blenheim, right up to "The Utopians are Just Out Boozing" from just a couple of years back. The band played subtly and mostly restrained and at a pleasant volume as Bill does, so it was easy to hear all that was played. Bill's music is quite a unique blend of indie/alternative rock always propelled along with great bass lines and Bill's un processed guitar sound and poetic lyrics. Hugely respected and written about in the annals of NZ music but still little known to the wider NZ public, still I love intimate gigs like this one. It was a great night.
Posted by Roddus at 10:49 AM 0 comments

Links to this post
Email ThisBlogThis!Share to TwitterShare to FacebookShare to Pinterest
Labels: Bill Direen, Live Concerts, The Builders 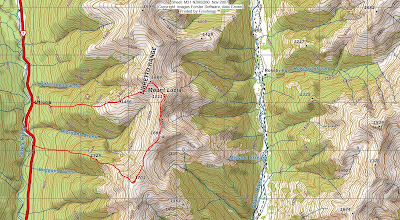 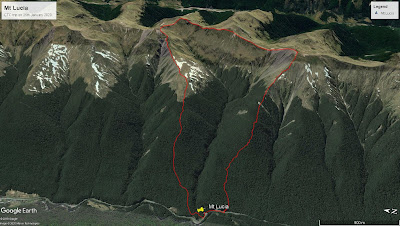 This CTC tramp was programmed in to the schedule by the leader as he believed this was one part of the Libretto Range that the club had seldom, if ever, visited. Mt Lucia was center of the range with the club running regular visits to Faust at the Southern end and Trovatore at the Northern End.
It was forecast to be a fairly warm day with the possibility of showers late in the day.  Nine trampers arrived at Riordons Creek about 10:30am, quickly donning our tramping gear before the sandflys swarmed and hit the bush on the north side of Riordons creek. No tracks to follow on this trip, so it was a bush bash up the 600M to the bushline. The group stopped a couple of time to regroup us stragglers on a fairly easy bushbash with the occasional areas of thicker scrub in some parts. About 2 hours to the bush line where we stopped for lunch in slightly spitting rain. It had been very muggy on the climb up so a lot of sweating had occurred, especially this scribe.
We started off again on the next 400M to get to the top of Lucia via point 1689. It was a pretty straight forward climb through the tussock although the wind did pick up on the tops to warrant putting on wind protection after out stop on Mt Lucia. Discussion was had as to what route we were going to take to get back to the cars, either back the way we came of head south to point 1701 and drop down the ridge south of Roirdons Creek. The tops traverse was mostly pleasant except for the wind but we made it back down to the bush line about 3:30pm. Unfortunately, it was while waiting at this point that one of our party who had lagged a bit behind, somehow managed to bypass the point at which we waited and continued on down the hill still thinking she was following the rest of us. After almost a half hour of waiting we realised something had gone astray and started looking back where she was last seen and using calls and whistles to see if she was still nearby. The decision was made, as we had no idea what had happened to her, to set off a locator beacon. Some of the party, including the leader and the one with the beacon stayed on the hill and the rest of us headed down to the cars to see if the missing person would turn up there. The bash back down took about an hour and a half. The missing tramper turned up about a half hour after we reached the cars all safe and sound and in good spirits and the others came out about another half hour later. On this trip I used the new app I had downloaded onto my smart phone, it recorded the route we took which I added into the Google Earth photo above and it was able to pick up satellites and show us where we were at any time. several in the party had these apps and they proved pretty reliable although some of  the figures varied as to how much distance we travelled and height gained etc. Mine suggested we walked 8.78 Kms and climbed 1171 meters in 7 hours and 55 minutes. 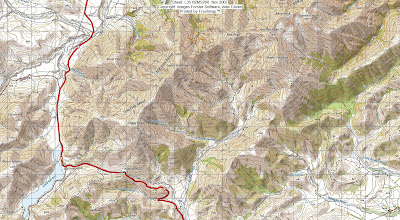 First real slog of the year with this Christchurch Tramping Club trip up Mt Torlesse and Red Peak.
Another close to home walk for me as I met the party at Springfield about 9am on a very pleasant Saturday morning. The leader said we might be able to get a key to the gate at the Big Tree and drive part way up the Kowai River and so it came about that we were able to shave off about 2km of slog up the Kowai river to the hut.
Our Party of eight took just under an hour to get from where we left the cars to the Kowai hut, where we had a scrog stop and topped up water bottles before the 1200m slog up the southwestern ridge to the summit of Torlesse. I was last up the hill as usual but was impressed enough to find that I had actually done the climb in just over 2.5 hours including another rest stop about half way up.
The tops on this day were fabulous, with almost no wind and plenty of sunshine and a very relaxed lunch was had at 1961 meters.
Then it was on wards as we dropped down and then re climb up to Junction Peak where we regrouped and then the same again onto Red Peak where another slightly extended break was taken. This also meant that I had now, over several trips and many years, walked along the entire tops of the Torlesse range, except the 1km of so from Red Peak to the Gap.
It was well past 3PM as we dropped into the scree run off Red Peak. The scree was patchy and there were plenty of larger rocks to slow the decent but overall I would rate it about 6/10 and others in the group agreed. We were still able to drop 6 to 700 Metres in pretty quick time although it was pretty hard going at the bottom as we dropped into the stream.
It was then just a case of negotiating the last 2.5kms down stream to the hut, but this was quite slow going in places as we had to scrub bash round a gorgy bit and a waterfall and we also waded through another gorgy bit as the water levels were pretty low. Took a good couple of hours plus to get close to where the hut was.Then it was the last slog down river back to the cars.
The trip was listed as 22KM with 1600M of climbing. We shaved a few KMs off with parking the cars up the river, so my estimate was climbed about 1550M  but only walked about 18KM. Took 9 hours 36 Minutes. 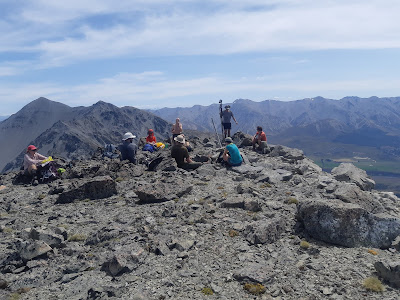 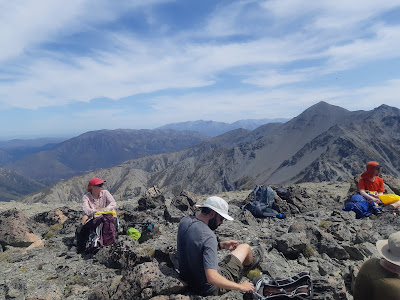 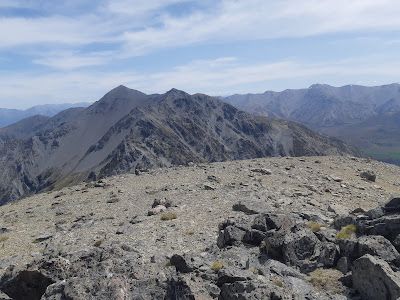 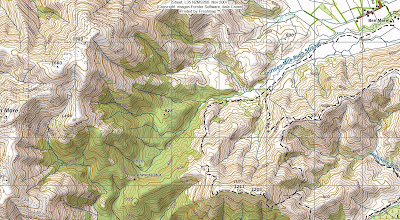 I had been aware of Benmore Hut and 13 Mile Bush for many years and it is virtually on my doorstep and on my eventually list, just never made the attempt to go there until now.
A relatively easy walk across some farm land and then native beech forest along well formed track. About 6KM to the hut. This was a CTC club trip with about 20 participants. The pace was relaxed moderate with plenty of stops. The hut was full of hunters when we arrived with three more hikers coming in intending to stay the night so it was going to be a busy evening. Then after a pleasant lunch as the wind started to get up, it was back out the same way.