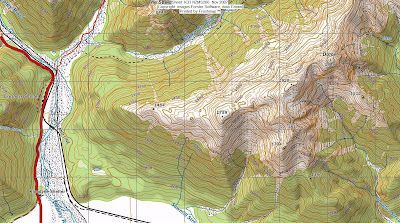 A small party of CTC trampers set off to scale Dome on a cool and windy Nor west day with ominous Nor west rain clouds shrouding Arthurs Pass but clear on Dome its self. Headed off from the rail bridge at 9:10am and bush bashed through fairly open forest up the north west ridge and onto the wind swept tops. Second lunch was had at point 1920 and due to time and the not too pleasant weather, it was decided to head back. We retraced out steps towards point 1759 and then dropped down a nice long scree into the Edwards River. Uncle Roddus was having a booming time bouncing down what was a pretty good scree, until he rolled his ankle and experienced some pain. After several minutes recovering, he gingerly set off again, getting faster as the pain lessened until it bloody well happened again. The rest of the trek out was taken somewhat gingerly and we made the cars about 6:30PM.

Unable to find any photos of this trip.
Posted by Roddus at 6:17 PM 0 comments