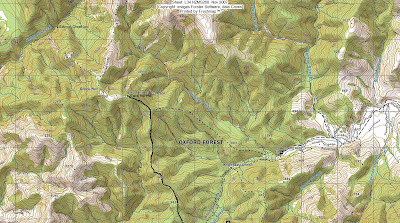 I thought it was about time for another visit to Salmon Creek Biv as I hadn't been there in over 7 years and it is right on my back door, so to speak. Brendon courageously volunteered to tag along and keep me company for this trip and after voting right on opening of the polls for the General Election, we headed off on a nice warm, but slightly windy morning. From the View Hill carpark we set off on the Warfdale track, through the black beech forest and wind our way around on a fairly flat track untill the obligatory lunch stop at the saddle. From there it is about 30 minutes to the junction where we start the hard stuff, climbing up to Black Hill Hut. We arrived at the hut, much in need of a rest and sustenance, 5 and 3/4 hours from the car, where I discovered that a party of 3 trampers I knew from the CTC had been in to Salmon Creek the night before, but we never encountered them coming out(I later found out that they had come out earlier after one of their number broke a finger and had taken a different route). We Left Black Hill Hut and climbed up to Black Hill, enjoying the views, before the big descent down into Salmon Creek. Most of the way the track was pretty good, but after the half way point we encountered some serious windfall and lost the track, spending a good 20 minutes trying to find it again. Arrived at the biv after 8 hours travel and settled in to enjoy the place, a nice spot apart from the ferocious sand flys. The Biv was built in 1950 and located at its present site beside Salmon Creek in 1984. Looking through the still original hut book, the place only gets about 8-10 visits a year, to have different occupants two nights in a row is unheard of.
Sunday was another lovely fine day as we set off for the big slog back up to Black Hill. Made the top in just over 2 hours and had an extended break on Black Hill top in perfect conditions and stunning views. It was pretty much business as usual for the rest of the trip, arriving back at View Hill, sore and tired in just on 8 hours. 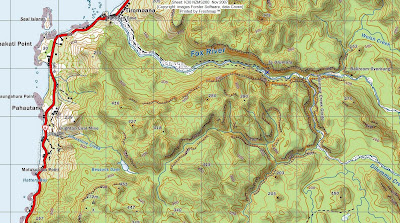 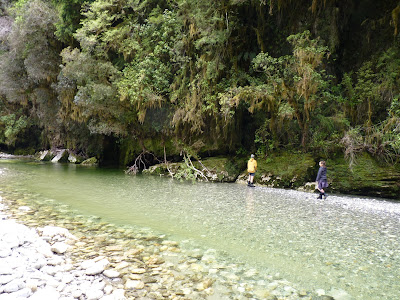