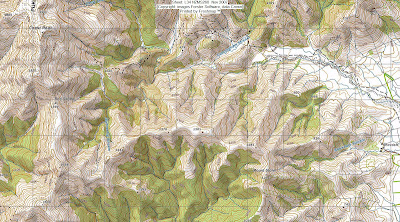 Frank and Honora again led this CTC trip to Chest peak, which again is a local tramp for me and one I had been eyeing up for some time. A party of  seven, some of which were also on the previous adventure, drove into Snowdale in the Lees Valley, on a clear and still day and proceeded to head up Cunningham Stream, following the old Ski Field Access Road. Left the cars about 10:45am and stopped at the Hut for lunch. Carried on following what was left of the old access road, some of it almost all gone now, before the final zig zag up the spur past point 1225 to the end of the road where there is an old and half gone caravan. The access road had been put in some time back in the 50s after a particular snow heavy winter and the caravan had been towed up there to serve as an office. The following seasons snows did not produce enough of the white stuff to be feasible and so the project was abandoned.
We set up camp around the Caravan and use the caravan as a kitchen, as well as Honora sleeping in it. Spent a pleasant night sitting round a fire in the snow.
Sunday was again fine and frosty as we set off about 9:00am for the 700M climb up to chest peak, which is the highest peak in the Puketeraki Range. took two hours to the top, having to crampon the last 100M before we then  headed around the snow filled basin at the top of Salmon Creek to point 1885, where we had lunch and enjoyed the fantastic views. Went out the same way we came in and got back to the cars about 7:15pm.