Tami Neilson was back in Christchurch again after her recent gig at The Wunderbar back in February, this time for a gig as part of the local Jazz and Blues festival that was running for the week ending  on the 29th May. I was wondering what Tami was doing playing in a Jazz and Blues festival but didn't really care as I just wanted to take the opportunity to see her play again after the excellent gig in February.
We arrived at the "Cardboard" Cathedral at around 7PM, after a lovely Korean meal in the central city. The place was still only partially full and we managed to get front row seats as nobody else seemed all that keen to be front row. The sound system wasn't all that large and I was wondering how it was all going to sound in this large room with a very high sloping ceiling and concrete floor. There were curtains at back behind the stage and along the walls so this should dampen some of the echo. By 7:30pm the place looked full and Tami and her band sauntered on stage and started the gig with a version of Howlin' Wolf's "Evil" at which point I realised that this was going to probably be some sort of Blues show to fit in with the jazz and blues festival. Tami confirmed this after the first song by giving us a little talk about what the gig was going to entail and talked about the history of contemporary music and how important the blues, and in the context of this show, Gospel music was to the evolution of modern popular music.
We then proceeded to be presented with a fantastic show, with Tami and her band belting out fabulous versions of songs but the likes of Ray Charles, Mavis Staples, Blind Willie Johnson, Sister Rosetta Tharpe, Otis Rush, just to name the ones I can remember off the top of my head right now. The sound did have a bit of an echo but was overall very good and even being in the front row quite near a speaker stand, it wasn't too loud. Her band was smoking and Tami really showed her awesome talent belting out the vocals of some legendary music, one highlight was an acapella version of a Ralph Stanley song with support from the whole band, very moving. I really felt the sense of the musical history being presented and the power of the music and had goose bumps at some of Tami's singing. What a talent. What a brilliant gig. 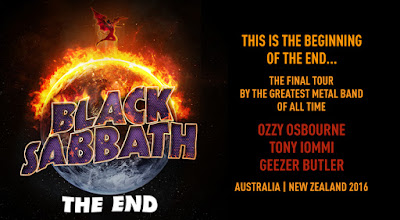 So Far this year has been one of the best in a long time for live concerts, not just the frequency of the amount of gigs happening but also the quality.
Black Sabbath did play in NZ a few years back but not in the South Island and I didn't know at that time that it was most of the original lineup that was actually playing or I might have been tempted to go up and see them.
After the release of their album "13" in 2013, I was blown away by the quality and shear heaviness of that record and I have said before that Sabbath are almost, if not, my all time favourite rock band. So I was not gonna miss seeing this original lineup playing for what they have told us is the last ever Black Sabbath tour.
Of course I was disappointed that Bill Ward did not play on "13" and also that he was not on this tour, the lowdown that I have read on the internet is that Bill was not at all happy with the deal he was offered in contract to participate in the tour and although he was apparently very keen to be involved he refused to sign the contract. It appears their is a bit of bad blood between Bill and Ozzy , especially after Ozzy apparently made some statements to the effect that Bill was not physically up to the tour. I was watching some footage of Bill in his prime in the first original Sabbath line up from the 70's and he was such a fantastic drummer, very fast and hit those drums very hard, and after watching him then and seeing them live now with the much younger drummer that are using at present, I really wondered if someone of his age(67) and  the fact he has had some health issues of late, was capable of playing like that, especially on a full tour.
Anyhow, I met up with a friend late afternoon in Dunedin and had dinner after which 3 of us were dropped off at the relatively new Forsyth Barr Stadium, a covered ground used for the local Rugby Team and international Rugby tests. It is a great venue and has the perfect place for a large stage setup at the northern end. The first thing we noticed as we entered the stadium about 40 minutes before the support band was due on was that it was all set up to only use half of the stadium and although it looked like most of the seating was full, it wasn't a tight crush on the floor where we were, I read that the attendance was about 10000.
The support band, Rival Sons, Hit the stage in due time as the venue was still filling and impressed most with their Bluesy Hard Rock-a-la The Cult being one reference that came to mind. They did well and the crowd responded well to their assault, although I found the songs all sounded a bit the same if you didn't already know their music as I didn't.
After a not too long break between sets and the stage was reset, the roar of the crowd signalled that something was happening on stage as the huge video screen at the back of the stage showed us an introduction that I am going to let my video below describe, before the bell chimed with the intro to "Black Sabbath", the opening song from their first album of the same name from 1970, as if no one knows.
This was fucking amazing, it was loud, as it should be, it was pretty clear, Ozzy was coming through pretty clear, most of the time, the thunderous drums were awesome and Tony's Soloing sounded clear and fantastic.  They thundered through a barrage of their 70's classics in all their glory with Ozzy constantly encouraging the crowd to go "Fucking Wild". Classic after classic of bone crushingly heavy music sent the crowd into ecstasy, this scribe included, it was just awesome. They played"War Pigs" much to my relief and i managed to get it on video before my memory got too full on my cell phone. "Rat Salad" gave the drummer, Tommy Clufetos, a chance for his moment in the spotlight with something like a 10 minute drum solo while the rest of the band had a nice rest off stage. Tommy was fucking phenomenal and I was very impressed with what he did. If I tried to do something like that i would need about 30 minutes to get my breath back, but ha had to go on and play another four songs. As I said all the set was from their 70's peak but one song I couldn't quite place and it turns out it was on the Technical Ecstasy album, so I had heard it before, it was definitely lighter in feel but Tony did what stood out for me as the best solo of the set. After the gig we were buzzing, certainly one of the best gigs ever for me. It was just brilliant.